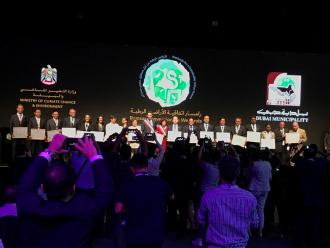 The Conference of the Parties (COP13)  to the Ramsar Convention on Wetlands which took place in Dubai last week has launched the Wetland City Accreditation programme.

During COP13 the Ramsar Convention accreditation programme has initially recognized 18 cities that have taken exceptional steps to safeguard their urban wetlands, saying that the pioneer cities will serve as examples and inspire deliberate actions for other cities towards sustainable urbanization.

Six of the cities are in China, with four cities in France and the Republic of Korea respectively.

Urbanization is transforming where and how people will live in the future – today some 4 billion people, about half of the world’s population live in urban areas. By 2050 that number is expected to increase as more people move into cities and as cities grow and demand for land increases, the tendency is to encroach on wetlands. Current trends in human settlement potentially pose a major threat for wetland conservation and wise use.

However, when preserved and sustainably used, urban wetlands can provide cities with multiple economic, social and cultural benefits. During storms, urban wetlands absorb excess rainfall, which reduces flooding in cities and prevents disasters and their subsequent costs. The abundant vegetation found in urban wetlands can also act as a filter for domestic and industrial waste and contribute to improving water quality.

The accredited cities are:

The Wetland City Accreditation scheme is intended to encourage cities in close proximity to and dependent on wetlands, especially Wetlands of International Importance, to highlight and strengthen a positive relationship with these valuable ecosystems, for example through increased public awareness of wetlands and participation  in municipal planning and decision-making.

The Accreditation scheme should further promote the conservation and wise use of urban and peri-urban wetlands, as well as sustainable socio-economic benefits for local people.

The voluntary scheme provides an opportunity for cities that value their natural or human-made wetlands to gain international recognition and positive publicity for their efforts.