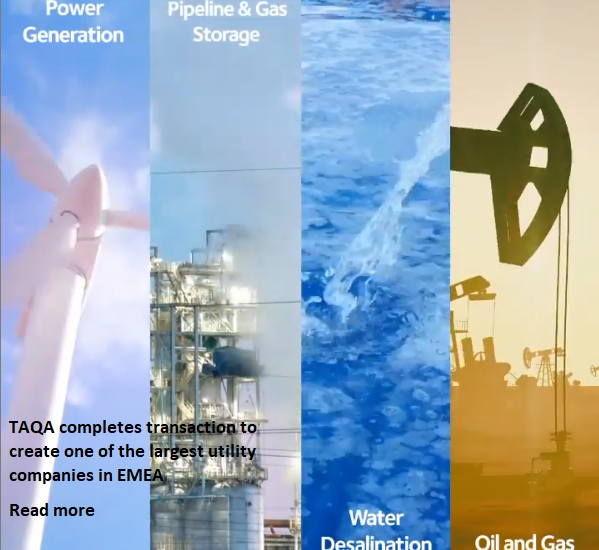 Abu Dhabi National Energy Company (TAQA) has announced the successful completion of its transaction with Abu Dhabi Power Corporation (ADPower), creating one of the largest utility companies in the Europe, Middle East and Africa (EMEA) region.

The transaction – which was first proposed by ADPower to the TAQA Board of Directors in February 2020 and received TAQA shareholder approval in April 2020 – saw ADPower transfer the majority of its power and water generation, transmission and distribution assets to TAQA in exchange for 106,367,950,000 new shares.

With the completion of the transaction, TAQA, which is listed on the Abu Dhabi Securities Exchange (ADX), is now the UAE’s third-largest publicly traded company by market capitalization and among the top-ten integrated utility companies in EMEA by regulated assets.

Across the UAE, its assets now include 12 power and water generation plants in operation. TAQA now also owns all of Abu Dhabi’s power and water transmission and distribution companies in addition to its existing international assets in Canada, Ghana, India, Iraq, Morocco, the Netherlands, Oman, Saudi Arabia, the United Kingdom and the United States.

As a result of the transaction, ADPower will own 98.60% of the entire issued share capital of TAQA. It is TAQA’s intention to seek an increase to the free float through a follow on public offering.

“The successful consolidation of Abu Dhabi’s power and water assets has created a true national energy champion that is well-positioned to spearhead the transformation of the utilities industry. TAQA’s strong balance sheet, predictable income, access to global capital markets and deep industry expertise enables it to play an active role in the UAE’s diversification strategy, putting a strong emphasis on clean sources. The company will invest and deploy new technology to ensure continued reliable and efficient supply of power and water and additional sustainable capacity to meet the demands of the UAE economy.”

“TAQA is now positioned to be a leading player in one of the world’s most exciting energy markets, the UAE. We benefit from a strong capital structure, a robust business model and exclusivity rights to participate in all generation and water desalination projects tendered in Abu Dhabi over the next decade with a minimum 40% equity share.

“Looking ahead, I’m confident that the combination of our enlarged base of power and water assets, diverse and talented workforce and strategic growth plans will enable us to capture exciting new opportunities now and in the years to come.”

Established in 2005, the diversified utilities and energy group is headquartered in Abu Dhabi, the capital of the United Arab Emirates, and listed on the Abu Dhabi Securities Exchange.

TAQA is a fully integrated utility company, with significant power and water generation, transmission and distribution assets, as well as upstream and midstream oil and gas operations.