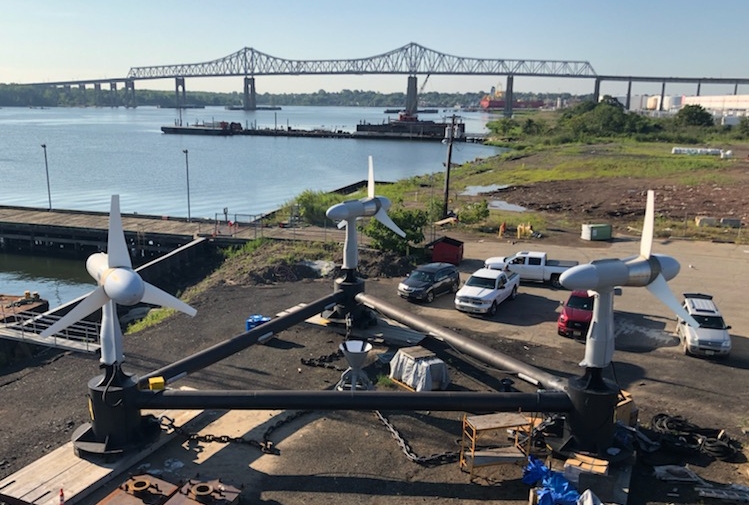 The turbines were transported from the company’s New Jersey marine engineering support services facility, where the turbines were assembled, to a marine vessel installation services area, where they have been integrated onto a Verdant Power TriFrame™ mount in preparation for on-water delivery and deployment at the RITE Project site.  In addition, the RITE Project Control Room on Roosevelt Island is being readied for the turbine system installation, which is planned for autumn 2020.

A New York-based company, Verdant Power plans to install three of its fifth generation “Free Flow Systems” or kinetic hydropower system (KHPS) turbines on a single TriFrame™ mount in the East River. This will be the pre-commercial phase of the company’s Roosevelt Island Tidal Energy (RITE) Project to design its KHPS tidal turbine, optimize the economics of installation and maintenance of arrays, and prove performance.

“This is the final pre-commercialization phase in a process that has seen 23 government agencies approve work on the RITE Project,” said Verdant Power CEO John T. Banigan. “We are proud to have been the first licensed tidal power project in the U.S.”

“Our focus is on maximizing system power performance, increasing availability and reliability, and reducing project CapEx and operating costs,” added Banigan. “The RITE Project not only will demonstrate clean power from the tidal currents, but also will demonstrate tidal power as a viable energy resource advancing our industry in the U.S. and globally.”

The RITE Project site will generate electricity under a hydrokinetic pilot project license issued by the Federal Energy Regulatory Commission – the first commercial license to have been issued for a tidal power project in the United States. The RITE Project has been supported by NYSERDA (the New York State Energy Research and Development Authority) and the U.S. Department of Energy, in addition to New York-based private equity capital support.