Astronomers and ecologists at the University of Leiden in the Netherlands are developing an instrument that lets people measure surface water quality with a smartphone.

The work is part of the international citizen science project, MONOCLE (Multiscale Observation Networks for Optical monitoring of Coastal waters, Lakes and Estuaries) is a collaboration between scientists and local people in Tanzania, Brazil and four European countries.

The device will be launched in other countries first – researchers and residents will measure the quality of the water in the Baloton Lake in Hungary, Loch Leven in Scotland, Lake Tanganyika in Tanzania, the Donau delta in Roemania and the lake area near to Stockholm in Sweden. 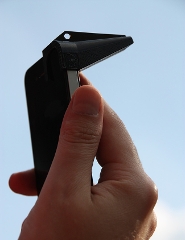 The user-friendly measuring instrument – a device which can be attached to a mobile – may also be available to Dutch citizen scientists in a couple of years’ time.

Astronomer Frans Snik at the University of Leiden explained:

‘These places have been chosen because the citizens taking part – fishermen and residents who want to have good, clean drinking water  – benefit from having a simple and fast way of making measurements.’ The researchers can verify the residents’ measurements using drones, buoys and satellites.

MONOCLE builds on the enormous success of Snik’s iSPEX citizen science project, in collaboration with SRON (Netherlands Institute for Space Research), the RIVM (National Institute for Public Health and the Environment) and the KNMI (Royal Netherlands Meteorological Institute).

In 2013, thousands of Dutch citizens helped measure the density of particulates in the air, and in 2015 similar measurements were made by thousands of inhabitants of large European cities such as Athens and London. They did this using an iSPEX add-on to their iPhone and a special app, both developed by Snik and his colleagues. Snik added:

‘It is a spin-off of our astronomy technology that we use to measure whether there is water in liquid form and oxygen present on planets around other stars, which could be an indication of extraterrestrial life.’

The iSPEX add-on is no longer compatible with today’s smartphones – the reseachers are working on a new version to fit every kind of smartphone that is expected to be ready by autumn 2019. The big challenge lies in processing and aligning the data from all the different kinds of cameras in different makes of smartphones.

Collaboration with the Leiden Institute of Environmental Sciences

The Institute of Environmental Sciences (CML) at Leiden University is also taking part in the project. The CML conducts research on the quality of surface water and the consequences of environmental polultion. The collaboration with the Leiden Observatory is giving an extra impetus to the project, according to Professor of Ecotoxicology Martina Vijver from CML:

‘The quality of the water is measured by hand in many places, including by determining the pH content on the spot or by taking samples back to the lab. Astronomers can make very precise measurements of things that are a very long way off. This is a partnership that brings together researchers from different worlds who are looking at how they can help one another.’

Given the digital revolution currently taking place, many new tools and techniques are emerging at an affordable price for commercial companies. The goal of MONOCLE is to develop new in situ sensors or methodologies and to promote the acquisition of in situ measurements.