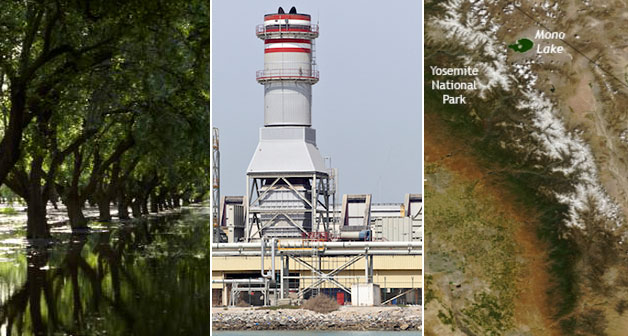 The US Department of Energy’s Lawrence Berkeley National Laboratory (Berkeley Lab) is launching a new research institute to focus resources on its growing portfolio of projects for water innovation.

Recognizing that the issues of water and energy are critically interdependent, the Water-Energy Resilience Research Institute’s (WWRRI) aim is to bring science solutions to water issues in California and beyond.

The Institute will house a gamut of research, from nano-engineered desalination solutions to ultra-high resolution climate modelling for watershed predictions to novel groundwater management approaches.

“Berkeley Lab has a strong foundation in fundamental science, materials science, and systems modeling, all things that are absolutely critical to advancing water technology.”

“And our location in California – and proximity to many of the leading research universities and major water utilities in the area – give us the opportunity to develop innovative research programs that are oriented to practical applications and concrete results.”

More than 12% of the energy used in U.S.A is for water production

Billions of gallons of water are used each day in the United States for energy production, and huge amounts of energy are consumed in pumping, treating, heating, and delivering water.

“The DOE has realized that water and energy are inextricably linked,” Peter Fiske continued. “More than 12% of the energy used in the U.S. is for water production, and water is a substantial limiter on energy production. So it makes sense for the two problems to be looked at together.”

WERRI researchers have expertise in a wide range of disciplines, from biogeochemistry and hydrology to nanoscience, economics, ecology, and computer modeling, to name a few.

In addition, the scientists will be able to take advantage of world-class Berkeley Lab facilities such as the Molecular Foundry and the Advanced Light Source, both DOE Office of Science user facilities, each with advanced instrumentation for scientific inquiry.

One of the top priorities for innovation is desalination – reverse osmosis has been the state-of-the-art in water desalination for half a century. However, while it is used in thousands of desalination plants around the world, the process is costly and highly energy intensive, without a lot of room left for improvement.

“There’s no free lunch left here.  Considering how mature the technology is, this effort is going to take a breakthrough.”

Berkeley Lab researchers are working on a number of approaches to efficiently separate salt from water – seawater or brackish water – ranging from understanding the fundamental properties of water at the nanoscale to advanced technologies for water treatment.

Another project already underway is groundwater banking. In collaboration with the Almond Board of California, Berkeley Lab researcher Peter Nico is testing how best to do groundwater aquifer recharge, combining ground-based and airborne techniques to get geophysical images of the subsurface.

While some of the projects are being tested and developed in California, WERRI’s ambitions extend beyond the state.

“California is a great test bed, but our vision for the Institute is indeed national,” Peter Fiske said. “While water problems are distinctive and somewhat different from region to region, they’re all characterized by the inability to accurately predict future demand and understand how supply is going to affect economic development.”

Berkeley Lab’s expertise in energy analysis will also be put into play for understanding and optimizing water systems. For example, researchers are investigating how to reduce the energy needed for groundwater pumping and utility-scale ocean desalination.

“Berkeley Lab has pioneered the use of techno-economic analysis to predict energy utilization and to understand the contributions from energy efficiency to the overall U.S. energy portfolio,” Fiske said. “Many of these same tools can be deployed for water.”

“We are delighted to see the U.S. Department of Energy recognize the critical role that water plays in energy security,” said Berkeley Water Center Co-Director David Sedlak. “WERRI comes at an important time for the state of California and the country as a whole, focusing Berkeley Lab’s world-class research capabilities on an issue of critical national need.”

Founded in 1931, the Lawrence Berkeley National Laboratory’s scientific expertise has been recognized with 13 Nobel Prizes. The University of California manages Berkeley Lab for the U.S. Department of Energy’s Office of Science.