The WPTO’s goal is to deliver low cost, reliable power and resiliency to the nation’s electricity grids – and the Office is investing heavily in the water power industry.

WPTO also unveiled the HydroWISE portal in 2017 for Department of Energy-funded data, tools, maps, publications, and hydropower research and development projects from industry and five national laboratories. It houses the Energy Department’s hydropower-related resources in one location, making it easier to search and access information.

Hydropower has long been the United States’ largest source of renewable electricity, providing not only baseload energy, but energy storage and essential services to the electric grid.

Water is an integral part of the energy mix in the U.S. – hydropower accounts for about 6% of the nation’s electricity.

According to the WPTO, marine energy, the newest frontier in water power, has the potential to generate electricity for millions of homes from predictable and consistent waves, tides, river and ocean currents along the US coastline. Marine energy technologies also offer the potential to provide cost-effective energy for remote or coastal areas.  Since marine energy is an early-stage market, the Office makes investments supporting key technology innovations.

Hydropower plays a key role in maintaining the reliability and the resiliency of the U.S. power grid.

The WPTO describes hydropower as “the ultimate grid stabilizer” due to its ability to quickly deliver power after an outage, address peak demands, and maintain proper voltage levels and frequencies across the grid. It is also seen as complementary to other forms of generation such as wind and solar because hydropower can act like a battery by storing energy

The U.S. pumped-storage hydropower (PSH) fleet provides 97% of the nation’s utility-scale storage—all generated from 42 plants across the country.

WPTO argues that because PSH has the ability to function as a battery and integrate variable renewable energy or excess electricity from base-load sources such as coal or nuclear, more storage like it is needed to support the grid.

The Office is funding early-stage research on new, transformative PSH designs that would improve sustainability and environmental performance and shorten development timeframes for new facilities.

US has 50,000+ non-powered dams with potential to add 12GW of hydropower capacity 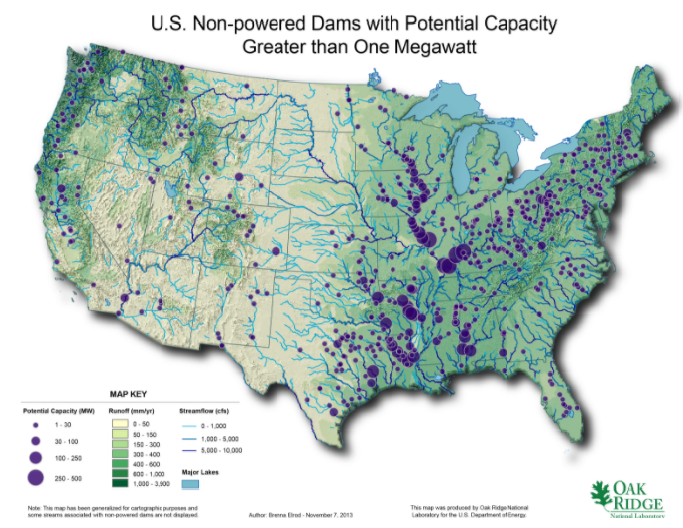 The WPTO’S Water Power Program has released reports and maps that assess the total technically recoverable energy available in the nation’s powered dams, non-powered dams, and untapped stream-reaches. The resource assessments are seen as pivotal to understanding hydropower’s potential for future electricity production.

An Assessment of Energy Potential at Non-powered Dams in the United States, compiled by the Department of Energy’s Oak Ridge National Laboratory (ORNL), has assessed the ability of existing non-powered dams across the country to generate electricity.

The 80,000+ non-powered facilities represent the vast majority of dams in the country; more than 90% of dams are used for services such as regulating water supply and controlling inland navigation, and lack electricity-generating equipment.

The study found that the nation has over 50,000 suitable non-powered dams with the technical potential to add about 12 gigawatts (GW) of clean, renewable hydropower capacity.