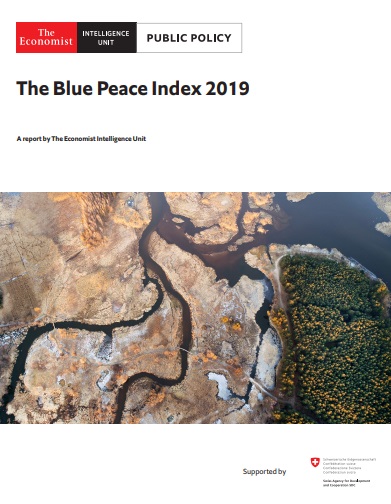 A new report by the Economist Intelligence Unit (EIU) is highlighting the critical threats to the world’s freshwater supplies as a result of global transboundary cooperation.

The report finds that the transboundary river basins – which supply the world with half of its freshwater flows – are run by ineffective water management bodies. With over 50% of the world’s population expected to be living in water-scarce regions by the year 2050, the EUI’s Blue Peace Index studies the challenges and the potential for conflict that water basin regions face.

According to the inaugural Blue Peace Index 2019, transboundary river basins provide provide more than half of the world’s freshwater flow and are home to 40% of the world’s population. However, less than a third of the basins have joint water management bodies—and those that do exist are often ineffective.

Several regions, such as the Tigris-Euphrates River Basin, are at particular risk of escalating conflicts over scarce water resources.

The Index examines how well countries and basins manage their transboundary water resources, and highlights priority gaps to address and best practices policymakers and practitioners can learn from

Rising stress on global freshwater poses significant challenges for agriculture, industry, energy generation, and domestic drinking and sanitation across the globe. Less than 3% of the world’s water supply is freshwater – by 2050 the world’s growing demand for freshwater could put 45% of the world’s global GDP and 40% of its grain production at risk, the report says.

The Index is flagging up “a worrying absence of collaboration structures” to govern these critical resources – with the potential for considerable economic, social and environmental consequences.

The Blue Peace Index 2019, developed by The Economist Intelligence Unit with support from the Swiss Agency for Development and Cooperation, addresses the importance of transboundary co-operation on water management for stability and sustainable development.

This can be in the form of shared institutions and legal frameworks bringing countries together in a commitment to resolve differences peacefully, and to use their shared water as a foundation for wider economic and diplomatic collaboration.

The gains of transboundary water co-operation vary from reduced flooding and drought and protected biodiversity through to enhanced energy security and optimisation of investments.

The index examines the extent to which countries and basins are managing their shared water resources in a sustainable, equitable and collaborative manner. In its first edition, the index analyses 24 countries across five transboundary river basins on 74 qualitative and quantitative indicators.

Amazon River Basin: There are relatively strong water management institutions, low water stress and actively engaged stakeholders in the Amazon River Basin, on both a national and transboundary level, but it is challenged by a lack of co-ordinated investment programmes and needs to improve co-ordinated pollution control mechanisms.

Senegal River Basin: Strong institutions have been developed on the basis of a comprehensive cross-boundary agreement, but the Senegal River Basin suffers from a difficult natural environment, which jeopardises food security and access to local drinking water.

Tigris-Euphrates River Basin: This basin faces considerable challenges across all index areas. The political and environmental context is particularly challenging and has resulted in almost non-existent regional co-operation. This difficult environment has far-reaching consequences, challenging access to water and negatively impacting pollution control.

Mekong River Basin: Strong technical institutions have been developed to manage transboundary water in the Mekong River Basin but it lacks co-ordinated political decision-making. The absence of a single river management institution that includes critical upstream countries China and Myanmar presents significant challenges to sustainable water management in the basin.

Sava River Basin: This basin has seen strong co-operation mechanisms developed in a difficult post-conflict situation and it represents best practice in many of the transboundary water co-operation areas. Nevertheless, it still lacks comprehensive mechanisms to engage stakeholders and co-ordinate investment activities.

“Water management and transboundary water co-operation can affect people’s fundamental rights and livelihoods. If we do not address these challenges, balancing the needs of different communities, individual disputes can evolve into long-term conflicts. Water can be weaponised but can also be a tool for co-operation, even in the most difficult contexts. The Blue Peace Index allows us to start conversations and keep this critical issue on the global agenda.”