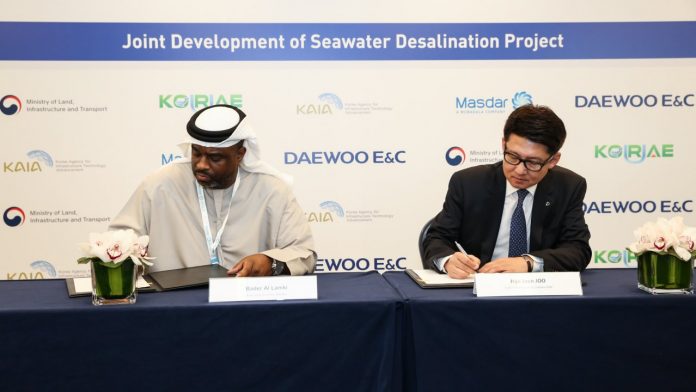 The commercial agreement lays the groundwork for the commercialization of the advanced reverse osmosis desalination technology, which will be developed under Masdar’s Renewable Energy Desalination Pilot Programme in Ghantoot, Abu Dhabi, in collaboration with the KORAE Research Group, which includes Daewoo E&C.

KORAE Research Group will become Masdar’s sixth international partner under the programme, which was launched in 2013 and first inaugurated in November 2015. The programme provides a test-bed for the development of innovative and advanced desalination technologies to help bridge the gap between promising desalination technologies developed in the lab and solutions ready to be applied in commercial settings.

“Water is the most important resource of mankind. To resolve freshwater shortage occurring around the world, investing in water technology development should be a top priority for mankind. Partnering with Masdar, who is the regional leader and a major international player in renewable energy and sustainable urban development, will be a great opportunity and strength to develop and commercialize the advanced seawater desalination technologies. In future, Daewoo E&C looks forward to cooperating with Masdar in various clean energy fields and around the world.”

Daewoo E&C is an international leader in the engineering and construction of large infrastructure projects in numerous industries. Through this agreement and in collaboration with Masdar, Daewoo E&C hopes to expand its business activities to include seawater desalination.

“Investing in the desalination sector is of critical importance as the global demand for freshwater is growing rapidly while freshwater reserves are shrinking. Partnering with industry leaders like Daewoo E&C, who have a vast range of construction and industry experience, will accelerate the development and commercialization of sustainable desalination technologies critically needed to enhance water security in the region.”