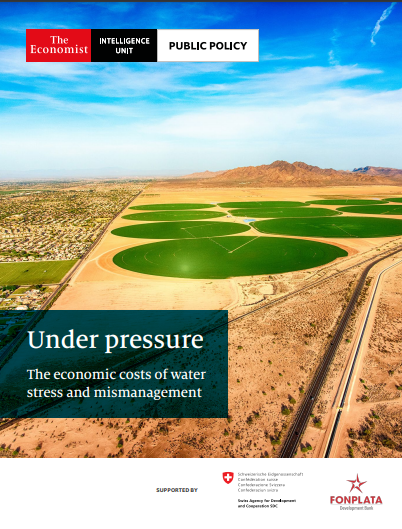 A new report which summarises the key findings of a research programme developed by the Economist Intelligence Unit (EIU) warns over the economic costs of water stress and mismanagement – in terms of  both water excess, as well as shortage.

Developed with support from the Swiss Agency for Development and Cooperation (SDC) and FONPLATADevelopment Bank,  the findings are informed by the research conducted for the Blue Peace Index programme.

The report says that the world has failed to manage its freshwater resources sustainably – the last century has seen an almost six-fold increase in withdrawal rates which has outpaced global population growth.

Driven by continued population growth, rising living standards, and the effects of climate change,  global demand for water is expected to continue to grow by around 1% per year until 2050.

“ Demand of this magnitude will result in a sharp increase in the proportion of the world’s population – and the share of the global economy – that is subject to water scarcity.”……

“Just as the proportion of the global population and economy affected by scarcity is set to rise, so too is the share of those affected by regular flooding and rising sea levels.”

The report draws attention to an estimate which suggests that nearly 75% of all natural disasters between 2001 and 2018 were water-related. In addition, during the past 20 years floods and droughts affected over 3 billion people and caused total economic damage of almost US $700 billion.

The report says that the complex nature of water systems sometimes present inherent tradeoffs between the vital interests of individual stakeholders.

However, it concludes that there are “clear steps that governments, companies and households alike can take to reduce the economic cost of water stress and mismanagement in the decades to come.”

The report makes the following recommendations: