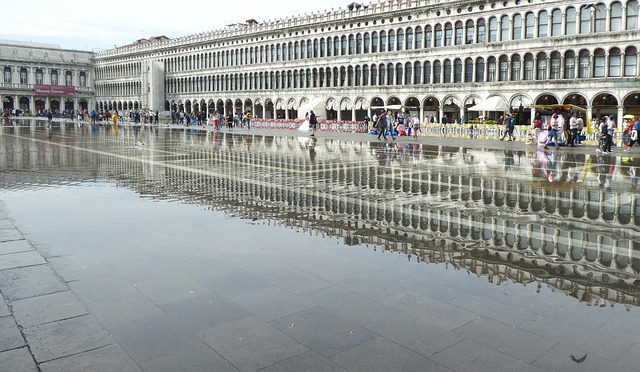 A new research study is warning that extreme sea levels (ESLs) in Europe could rise by as much as one metre or more by the end of this century due to climate change.

Published in Nature journal, the researchers  have  found that at least 83% of flood damages in Europe could be avoided by elevating dykes in an economically efficient way along 23.7%-32.1% of Europe’s coastline, specifically where high value conurbations exist.

At present, more than 200 million European citizens live within 50 km from the coastline, stretching from the North–East Atlantic and the Baltic to the Mediterranean and Black Sea, and current trends indicate that migration toward coastal zones is continuing.

Coastal zones are particularly vulnerable to climate change due to the combined effects of sea level rise and potential changes in the frequency and intensity of storms. Global mean sea level has increased by 13–20 cm since pre-industrial times – a process which has accelerated since the 1990s due to global warming. This has already contributed to coastal recession and made Europe’s coasts more susceptible to coastal hazards.

The study concludes that continued rise in sea levels along Europe’s coastlines in view of global warming could result in unprecedented coastal flood losses in Europe, if no additional coastal protection and risk-reduction measures are implemented.

The researchers set out a range of possible adaptation measures to increase the resilience of future coastal societies to flooding summarized as protect, accommodate, retreat and do nothing.

The researchers say that among the various adaptation options, hard protection is the strategy that delivers the most predictable levels of safety against coastal extremes and sea level rise and has been applied widely along developed coastlines of Europe, despite the fact that hard protection can affect the landscape in a negative way, increase erosion, reduce amenity value and result in more catastrophic events in the case of failure. As a result, there is the increasing trend to apply a combination of adaptation options, with some kind of impermeable protection element being one of them.

The study sets out an evaluation of the costs and benefits of applying additional protection through dyke improvements along the European coastline, assuming that the densely populated and high income European coastal communities will choose to hold the line.

The researchers are underlining the unprecedented rise in damages from coastal flooding unless mitigation and adaptation measures are taken.  Around 95% of these impacts could be avoided through moderate greenhouse gas emission mitigation and by raising dykes where human settlements and economically important areas exist along the coastline.

The European average 100-year ESL is projected to show a very likely increase of 34–76 cm under a moderate-emission-mitigation-policy scenario and of 58–172 cm under a high emissions scenario.  The biggest ESL increase is projected for the North Sea, due to increasing meteorological contributions, while the contrary applies for the northern Baltic Sea; due to land uplift. The Atlantic coast of Spain and Portugal is also projected to experience a lower increase in extreme sea levels, due to milder storms.

The consequences of doing nothing

At present, coastal flood losses in Europe amount to €1.4 billion per year (all values are expressed in 2015 € values), and each year about 100,000 EU citizens are affected from coastal flooding. Flood risk is projected to increase strongly in Europe with global warming. In the absence of further investments in coastal adaptation and under the Sustainability scenario, annual coastal flood losses for Europe by the end of the century are projected to grow to €209.8 billion around a very likely range from €29.7 billion to €844.5 billion.

Similar estimates under fossil fuel based development are €1268.4 billion. During the same time span, the total number of people flooded in Europe is projected to rise to 1.61 (0.5–3.1), and 3.9 million (3.9–6.9), for the two scenarios. Coastal flood risk will increase in all EU-countries that have a coastline, with France, the UK, Italy and Denmark showing the highest absolute increase in coastal flood risks towards the end of the century.

For some countries, the researchers have concluded coastal flood losses at the end of this century could amount to a considerable share of their GDP, especially under a high-emissions pathway (RCP8.5), most notable in Cyprus (4.9%), Greece (3.2%), Denmark (2.5%), Ireland (1.8%) and Croatia (1.8%).

The Netherlands is a particular case as the country is already very well protected (up to ~10,000 year return period), by an extensive network of dykes and surge barriers.

With additional protection the study finds it is even less likely that the country will experience a catastrophic flood during the century. However, the Netherlands have a high income level, an extensive low-lying area and high population density, so flood events can have massive impacts when they occur, and for that reason the mean country-level BCR is the highest in Europe.

The researchers also point out that the benefits delivered by dykes often occur long after they have been constructed. Discounting is used to reflect that the costs and benefits incurred in the future are of less value than those delivered in the near term.

The results highlight potential savings in terms of avoided damages that can be obtained through strategies that increase structural flood protection at the subnational scale.

This article is licensed under a Creative Commons Attribution 4.0 International License.