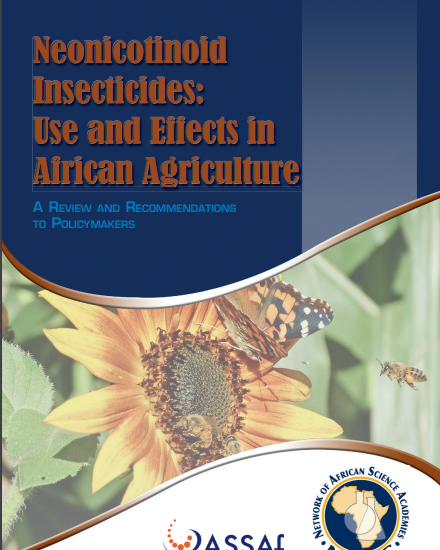 A new research study is warning that the use of neonicotinoid  insecticides is  putting African food security at risk – scientists are calling for urgent action now to prevent further deterioration in the sustainability of African agriculture.

Agriculture is critically important for African societies and economies, but ensuring food security for Africa’s growing population is a major challenge due to climate change, structural changes in land use and management, and intensification of agriculture, including the use of pesticides.

Neonicotinoid  insecticides have  already been  shown  to  contribute  to the loss of ecosystem services from pollinators and other insects in Europe and elsewhere. Several of  them  have  been  banned  in  the  EU  and  other  countries,  due to their harmful  effect  on  beneficial insects.

The pesticides render all parts of a plant toxic to all insects and are highly water soluble, meaning they contaminate the soil and water bodies.

It is not too late to learn from the negative experiences elsewhere and apply this to Africa to develop a more sustainable agriculture that fully exploits the benefits from the surrounding natural ecosystems rather than damaging them. But the time remaining is short given the rapid growth anticipated in the reliance on chemical pest control in African

The study looked first at the extent of neonicotinoid usage in Africa. On the basis of available evidence, overall pesticide consumption appears to be between 2.1% and 6.8% of global pesticide use. Such estimates are consistent with market penetration being at an earlier stage than in more mature markets such as Europe and North America.

Africa has been flagged as the fastest growing market for insecticides in recent market surveys. The scientists are warning that with the 2018 ban on the use of three neonicotinoids in the EU, neonicotinoid manufacturers may seek new markets in African countries either to replace older pesticides or to increase rates of use.

According to the study, there is already evidence of widespread environmental contamination from neonicotinoids in Africa. A limited number of studies have also confirmed contamination in soils, again with examples where levels are very high compared with the highest levels found in European studies. Neonicotinoids have also been found in water, snails and sediment near agricultural areas.

The scientists say that the negative effects of neonicotinoid insecticides on ecosystem services shown in research and field studies globally are cause for concern for Africa.

The study suggests that a precautionary approach needs to be taken on the basis of the existing scientific evidence on the negative effects of neonicotinoids and concludes that, overall, stricter regulation of insecticides is required across Africa.

Central to this should be maximising the use of natural controls to balance pest pressures and reduce the need for pesticides. The review recommends that African regulatory systems should pay close attention to the results of the regulatory reviews already conducted in Europe.

The report sets out a number of recommendations for ensuring food security within a sustainable agricultural system, including:

The study concludes that it is urgent to act now to prevent further deterioration in the sustainability of African agriculture, saying:

“There are significant opportunities now to act on existing knowledge about the harmful effects of neonicotinoids, to protect ecosystem services and thus African biodiversity and agricultural sustainability.”

The study by the InterAcademy  Partnership  (IAP) and the Network of African  Science Academies  (NASAC) was conducted between October 2018 and October 2019 and involved two workshops with leading expert scientists from 17 African countries, as well as an extensive review of relevant African research.

The activity was stimulated by a study on the impact of neonicotinoids on agriculture and ecosystem services in Europe by the association of the National Science Academies of European  Academies’  Science  Advisory Council  (EASAC),  which contributed to subsequent legislation to ban neonicotinoids in Europe.

“Maintaining  the  biodiversity  that  supports  ecosystem  services  such  as  pollination  and  natural  pest control is critical to the sustainability of African agriculture, to ensure food security and its contribution to African economies and supporting rural communities. In addition biodiversity provides resilience against climate change and other environmental pressures.”

Click here to download the report Neonicotinoid Insecticides: Use and Effects in African Agriculture – A Review and Recommendations to Policymakers