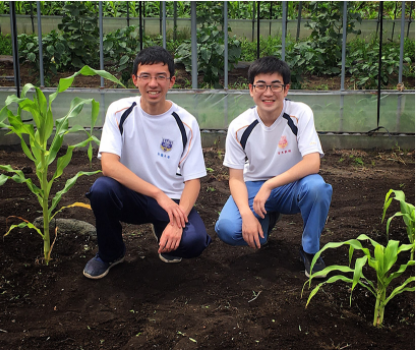 The 2020 Stockholm Junior Water Prize has been awarded to a team from Japan for their innovative approach to soil erosion.

HRH Crown Princess Victoria of Sweden, Patron of the Prize, announced the winners at an award ceremony on 25 August.

Hiroki Matsuhashi and Takuma Miyaki from Japan won the Stockholm Junior Water Prize with a method to control soil runoff and increase food production. In a project video they explained why they chose to use the traditional Japanese soil solidification technology Tataki. “This system is made of only inexpensive natural materials, so it is cheap and eco-friendly. We would like to spread this system to the world and solve water and food problems,” the team said.

In its citation the Jury noted that:

“This year’s winners have proven that simple local solutions can solve water problems in a global context. Through systematic studies the contestants have developed methods to make water conservation and soil management more achievable. The contestants effectively combined scientific knowledge and experimentation to revolutionize the way water is collected, used, and conserved for agriculture in arid regions.

The research also demonstrated soil erosion control and nutrient management to make agriculture sustainable through the method developed. The technology is a low-cost, simple to implement and globally applicable method for arid region agriculture.”

The international competition has been arranged by SIWI every year since 1997, with Xylem as Founding Sponsor, to encourage water innovation. Many thousands of students aged 15 to 20 compete with projects that could solve major global water challenges.

Competitions are normally held in 38 participating countries, with the respective winners eventually vying for the international title, but this year only 29 countries managed to hold their national contests.