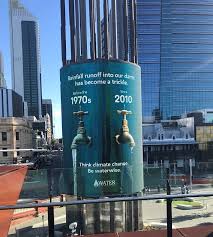 New climate change and waterwise awareness campaign has been launched by State Government, through the Water Corporation at the start of National Water Week (October 19-25 2020). This year’s National Water Week theme is Reimagining our Water Future.

Western Australians are being encouraged to reconsider how they use water as they are faced with the impacts of climate change and reduced rainfall. The government is attempting to remind the population to put water usage habits into practice and is all part of a new awareness campaign launched by Dave Kelly Western Australia’s Water Minister.

Since the 1970s climate has changed significantly in Western Australia (WA). Due to declining rainfall the State’s south-west is now one of the regions most affected globally by climate change. On average, there has been a decrease of more than 80 per cent in the amount of rainfall runoff into dams compared to the 1970s.

Perth, capital of WA and the fourth most populous city in Australia (population approximately 2million) continues to have its water supplies secured by the Water Corporation by having more climate-independent sources to the mix added, however, individuals, businesses, and governments all have a part to play in conserving the State’s valuable water resource.

“Perth has just experienced its fourth driest and warmest winter on record and, and with higher than average temperatures and decreasing rainfall in the south-west of the State, we all need to continue being waterwise in the home and workplace to help conserve this precious resource.

While the State Government is responding to the impacts of climate change on the ground, it is the Commonwealth Government that ultimately needs to be part of the global solution by engaging with the international community on the issue, and taking real action to reduce the causes of climate change.

Addressing climate change requires collaboration and action from everyone – by thinking about the impacts of climate change on our water supply, and being waterwise, we can make a real difference.”

The educational campaign encourages Western Australians to make small changes to their daily water use practices and incorporates the tagline Think Climate Change. Be Waterwise. The first part of the campaign will run until the end of December 2020 across print, broadcast and digital media.