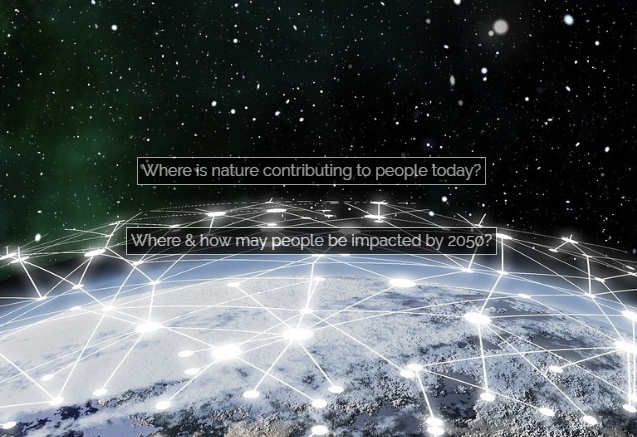 A new Stanford-led research study has developed an interactive global map tracking contributions from nature to human well-being which suggests that by 2050 up to five billion people are likely to face food shortages and lack of access to clean water as a result of nature’s declining ability to provide protection.

The researchers found that people in Africa and South Asia were particularly at higher risk .

The study, published Oct. 10 in Science, could inform policy and decision-making around investments in nature. For example, the models suggest that places within the Ganges Basin and parts of Eastern China can be targeted for high-impact investments in natural ecosystems. Preserving or restoring these areas’ ecosystems will help bolster the well-being of entire communities.

“Thanks to rapid recent technological improvements, we’re now able to map these local contributions from nature in a detailed, accessible way at a global scale.”

Chaplin-Kramer and her fellow researchers set out to understand and map where nature contributes the most to people and how many people may be affected by future changes in climate, fossil fuel use and development.

They focused on three fundamental benefits that nature provides to people: water quality regulation, protection from coastal hazards and crop pollination. Using open-source software developed by the Natural Capital Project – a global partnership focused on natural capital research and application – they modeled how the flow of these benefits might change in the future.

Across the board, they found that where people’s needs for nature are greatest, nature’s ability to meet those needs is declining. By 2050, their projections show that up to 5 billion people could be at higher risk of water pollution, coastal storms and underpollinated crops.

Critically, the team’s research shows that these impacts are inequitably distributed. In all scenarios, developing countries shoulder a disproportionate share of the burden.

“Our analyses suggest that the current environmental governance at local, regional and international levels is failing to encourage the most vulnerable regions to invest in ecosystems,” said study coauthor Unai Pascual, co-chair of the Intergovernmental Science-Policy Platform on Biodiversity and Ecosystem Services (IPBES) Values Assessment. “If we continue on this trajectory, ecosystems will be unable to provide natural insurance in the face of climate change-induced impacts on food, water and infrastructure.”

People in Africa and South Asia are the most disadvantaged in the face of diminishing contributions from nature. More than half the population in these regions is facing higher-than-average “benefit gaps,” the tangible elements – like vulnerability to coastal storms, water pollution or crop losses – that people feel when contributions from nature stop flowing.

The researchers are warning that impacts aren’t isolated to certain countries and that under climate change, projected sea-level rise increases risk to coastal communities everywhere and may impact over 500 million people worldwide by 2050.

Informing policies to invest in nature

The researchers’ technological application of integrated, high-resolution data provides an opportunity to incorporate nature into worldwide policy decisions. The vehicle for this is an online viewer that presents complex global data in a digestible way – high-resolution, interactive maps.

The team is looking to policymakers, development banks and other global influencers to use the information to drive sustainable development and conservation.

“Determining when and where nature is most important is critical to understanding how best to enhance people’s livelihoods and well-being,” said study co-author Stephen Polasky, a professor of environmental economics at the University of Minnesota and coordinating lead author of the recent IPBES Global Assessment.

Looking forward, the researchers are expanding their analysis to model other ecosystem benefits. They are also looking to more deeply understand where nature’s contributions could best support the planet’s most vulnerable populations.

“We hope that this work will advance the integration of nature’s contributions to people into decision making and further galvanize global action,” said Chaplin-Kramer. “We’re equipped with the information we need to avert the worst scenarios our models project and move toward an equitable, sustainable future. Now is the time to wield it.”

The Natural Capital Project is part of the Stanford Woods Institute for the Environment.