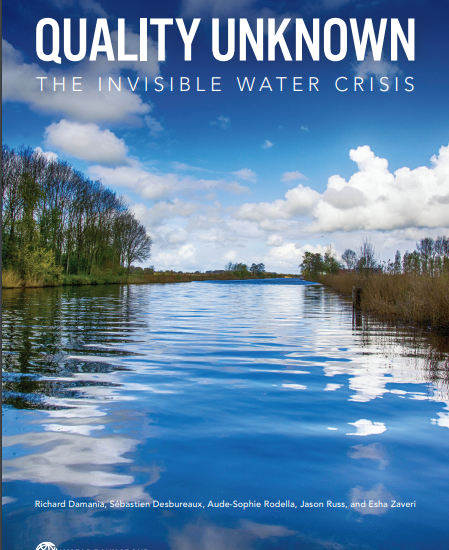 The world faces an invisible crisis of water quality that is eliminating one-third of potential economic growth in heavily polluted areas and threatening human and environmental well-being, according to a new World Bank report.

Using new data and methods Quality Unknown: The Invisible Water Crisis shows how a combination of bacteria, sewage, chemicals, and plastics can suck oxygen from water supplies and transform water into poison for people and ecosystems.

The report is calling for immediate global, national and local-level attention to these dangers which face both developed and developing countries.

When Biological Oxygen Demand – a measure of how much organic pollution is in water and a proxy measure of overall water quality – crosses a certain threshold, GDP growth in downstream regions drops by as much as a third because of impacts on health, agriculture, and ecosystems.

Nitrogen is a key contributor to poor water quality – applied as fertilizer in agriculture, it eventually enters rivers, lakes and oceans where it transforms into nitrates. Early exposure of children to nitrates affects their growth and brain development, impacting their health and adult earning potential.

The run-off and release into water from every additional kilogram of nitrogen fertilizer per hectare can increase the level of childhood stunting by as much as 19 % and reduce future adult earnings by as much as 2 %, compared to those who are not exposed.

The report also finds that as salinity in water and soil increases due to more intense droughts, storm surges and rising water extraction, agricultural yields fall.  The world is losing enough food to saline water each year to feed 170 million people.

Understanding the extent of the problem

The World Bank says that complexity of water quality and the multitude of parameters that need tracking are at least partly why global water quality monitoring has proved so troublesome. Not only does pollution not decline with economic growth, but the range of pollutants tends to expand with prosperity.

The United States alone receives notices for the release of more than 1,000 new chemicals into the environment each year—or around three new chemicals per day. “Keeping up with such a growing range of risks is difficult even in countries with significant resources and nearly impossible in developing countries” the report warns.

Well-known pollutants such as fecal contaminants, as well as new pollutants, including nutrients, plastics, and pharmaceuticals, present significant challenges, while salinity is flagged up as having serious impacts on impacts on agricultural yields.

Today, saline waters and soils are spreading throughout much of the world—especially low-lying coastal areas, irrigated drylands, and around urban areas. The report quantifies the effects on yields and finds they fall almost linearly with salt concentrations in water. Overall, enough food is lost each year because of saline water to feed 170 million people, or a country the size of Bangladesh. Despite this, there are no health-based drinking water standards for salt.

According to the World Bank, pollutants of emerging concern such as microplastics and pharmaceuticals exemplify the complex nature of water quality issues: multifaceted, with no immediate or obvious solutions.

“The usefulness of plastics and pharmaceuticals is immeasurable, and yet the unintended byproducts have consequences that are widespread and difficult to quantify and contain.”

Commenting on microplastics,  the report says that although there is uncertainty about the extent of the problem, some studies have detected them in 80% of global freshwater sources, 81% of municipal tap water, and even 93% of bottled water. Removal of plastics, once in water, is difficult and costly.

The report highlights BOD as “perhaps the most appropriate measure to use to test the relationship between upstream water quality and downstream GDP, given its ability to proxy a wide array of pollutants.”

Pointing out that few developing countries adequately monitor water quality, the report says that new technologies and techniques have made measurement more feasible and reliable.

However, the World Bank warns:

“Measurement is only effective if it is coupled with well-designed regulations that provide incentives for firms and individuals to adhere to water quality guidelines. But the longer the pipeline of regulations, the greater the opportunities for leakage, rent seeking, and corruption.”

The report says there is an urgent need for greater investment in wastewater treatment plants, especially in heavily populated areas. More than 80 % of the world’s wastewater—and more than 95 % in some developing countries—is still released into the environment without treatment.

Long-standing assumptions about wastewater treatment infrastructure need to change — investments must be scaled up but also need to become more effective.

However, the report finds that at times, investments in wastewater treatment facilities lead to little measurable improvement in water quality, representing a waste of scarce public funds.

According to the World Bank:

“The large gap in public sector resources suggests the need for new models that attract private investments…. The findings from this report show that long-term costs have been underestimated and underappreciated.”

The report is recommending a set of actions that countries can take to improve water quality,  including: